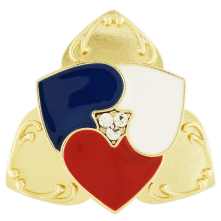 For the past thirteen years, South Carolina Daughters of the American Revolution have presented a South Carolinian with the Bobby Gilmer Moss Award.
It is to recognize an individual who has made significant contributions to the body of knowledge related to the American Revolutionary War and the formative years of the creation of the United States of America.
The Awards Committee chooses based on this contribution the nominee has made through research, writing, and publication related to the Revolutionary War and how it expands the knowledge about Patriot life and the events related to this war. The nominee shall be one whose writing goes beyond the nominee’s professional work.
Based on the books, “Courageous Kate,” “Fearless Martha,” “Brave Elizabeth,” and “Walking with Eliza,” the SCDAR presented Sheila with this award at the 2019 March Spring Conference. She was the first South Carolina Daughter to receive this award.
At the same ceremony, SCDAR presented Sheila with a National DAR Award for Excellence in Children’s Books for her book Brave Elizabeth.

What an honor to be named to Southern Writers Gallery of the Stars! I am humbled that my writing and the stories of these women connect with so many people!

I am beyond grateful that Tales of a Cosmic Possum has been listed on the long list for The Southern Book Prize under biography! It is an honor to be named among such incredible writers.

Wow! I am speechless that Tales of a Cosmic Possum has been chosen for the 2017 Fall Okra Picks! Thank you so much, readers!

I am honored to have “Kate” chosen for the DAR National Historic Preservation Award! It is so important that we teach our students and ourselves about our history. I’m honored to be a part of preserving the history of the forgotten heroines of the American Revolutionary War!