“Food will win the war and write the peace,” announced Agriculture Secretary Claude Wickard in a statement to the press in early 1943. Even before the United States entered the war in 1941, U.S. farmers were producing at record levels to supply the food needs of the Allies. After the Japanese bombing of Pearl Harbor, getting food and equipment to our troops strained production and distribution systems to their limits. Farm labor was in short supply as men left for military service.

Patriotic fervor was contagious and victory gardens sprang up everywhere.

I hope every American who possibly can will grow a victory garden this year. We found out last year that even the small gardens helped.

The total harvest from victory gardens was tremendous. It made the difference between scarcity and abundance. The Department of Agriculture surveys show that 42 percent of the fresh vegetables consumed in 1943 came from victory gardens. This should clearly emphasize the far-reaching importance of the victory garden program.

Because of the greatly increased demands in 1944, we will need all the food we can grow. Food still remains a first essential to winning the war. Victory gardens are of direct benefit in helping relieve manpower, transportation, and living costs as well as the food problem.”

In 1943, Americans planted over 20 million Victory Gardens, and the harvest accounted for nearly a third of all the vegetables consumed in the country that year. Emphasis was placed on making gardening a family or community effort — not a drudgery, but a pastime, and a national duty.

No one could just walk into a shop and buy as much sugar, butter, meat as you wanted, nor could you fill up your car with gasoline whenever you liked. All these things were rationed, which meant you were only allowed to buy a small amount (even if you could afford more). The government introduced rationing because certain things were in short supply during the war, and rationing was the only way to make sure everyone got their fair share. 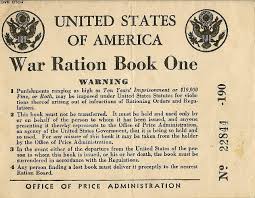 The Japanese attack on Pearl Harbor dramatically ended the debate over America’s entrance into the war that raged around the world.  As eager volunteers flooded local draft board offices, ordinary citizens soon felt the impact of the war. Almost overnight the economy shifted to war production. Consumer goods now took a back seat to military production as nationwide rationing began almost immediately.  In May of 1942, the U.S. Office of Price Administration (OPA) froze prices on practically all everyday goods, starting with sugar and coffee.
Then war ration books were issued to each American family, dictating how much gasoline, tires, sugar, meat, silk, shoes, and other items one person could buy. Even children received their own books.

In Ingle Holler, outside Union, SC, these gardens were dubbed vegetable gardens, because they were a way of life for this clan. Every year, a garden was planted by each family; World War II did not change their way of being self-suficient.

John’s grandfather, Make Ingle, bought fifty acres of land from Excelsior Mill (later Milliken Mill), during the Depression in 1937. His children then bought acreage from their father, built homes, and lived their lives similar to their Appalachian ancestors.

The third generation, which included my husband,  always had playmates, as well as working partners. Growing up solely around extended family isolated the children in some ways, but also instilled in them a sense of place and acceptance. All looked out for everyone else; the doors were always open in each home, and no one had to knock to be admitted.

Gardens were a family affair. John’s dad Oliver dug the garden with a hand plow. It had several ploughshares for breaking up the dirt, for cultivating and breaking up the clods, and a v-shaped one that laid off the rows. Then his mother Lois supervised her sons planting the seeds. Using broken sticks off nearby trees, the two boys poked holes in the rows and dropped the seeds. Oliver then came back with the v-shaped ploughshare and covered up the seeds.

Weeding was a daily job for the boys, and water was free from the nearby creek.

Because trains and trucks had to be used to transport soldiers, vehicles, and weapons, most Americans ate local produce grown in their own communities. More than one million tons of vegetables were grown in Victory Gardens during the war.

People with no yards planted small Victory Gardens in window boxes and watered them through their windows. Some city dwellers who lived in tall apartment buildings planted rooftop gardens, and the whole building pitched in and helped.

Many schools across the country planted Victory Gardens on their school grounds and used their produce in their school lunches. The U.S. government printed recipe books describing how to prepare home grown vegetables to make nutritional and tasty meals. Agricultural companies gave tips on how to make seedlings flourish in different climates.

My dad, Sam Collins, along with his brother Wallace, fought in the Army during World War II, in the European theater. Growing up during the Great Depression and on a farm in Kentucky, he knew the importance of providing for his family. His job was to milk the cows in the dairy; this meant waking up to go to the barn at 5:00 a.m. for this chore before he walked to school. Daddy had a strong sense of the importance of hard work and taking care of his family. Though he was not one who enjoyed the outdoors, for forty years he planted a garden in our back yard. As the years went by, it grew smaller and was finally only tomato plants for our summer eating.

I can see him now with the old hat he wore in the garden pinching the suckers off, so the tomatoes would grow. He would smile with glee when he brought tomatoes into the house. For some, this was a piddling and unremarkable task, but it was more. This farmer turned banker never got over the realization that the earth was created for our bounty and benefit. By example, he taught us that a victory/vegetable garden is for each generation

As James 1:17 says, “Every good and perfect gift is from above, coming down from the Father of the heavenly lights, who does not change like shifting shadows.”

By the way, my husband John picked his first tomato yesterday from our backyard.