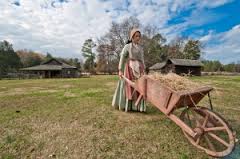 At Brattonsville, SC, this Saturday, July 11, will be an all-day celebration of the Battle of Huck’s Defeat.

You can find more information at http://www.chmuseums.org/battle-o.. Visit the original house, and walk where this family worked and lived.

I thought you might enjoy some of the back story of the Revolutionary War heroine, Martha Bratton, who made sure this battle happened. You can read more of her story in my biography about her called Fearless Martha.

In 1765, William, his four brothers and their families, and his sister and her family moved to Upcountry South Carolina from Rowan County, North Carolina. They purchased land grants and moved as a clan. Settling side-by-side, they soon became part of the community. They chopped down trees to build cabins and plant fields and joined the Bethesda Presbyterian Meeting House.

At the time of the Revolution, a woman’s role in society was limited. Most devoted themselves to taking care of home and family, and the men dealt with the political arena.

Still, many women became involved in events because they war came into their front yards. Some were Whigs – believers in independence for the colonies. Others were Loyalists – supporters of Britain’s king. All of the Bratton family, both men and women, were staunch Whigs.

Life wasn’t easy on the home front. With the men away at war, women had to protect their families, see to the crops, and defend family property. This was in addition to their normal every day routine that started before sun rise and ended long after dark. I believe the saying, “a woman’s work is never done” might be used to describe their daily lives. There were constant demands.

There is little known about the early life of this fearless woman, Martha Bratton. Traditions say that she was born onboard a ship crossing the Atlantic Ocean from Ireland to America about 1750. She was taught how to heal with herbs and had a gift for home health. When she and William moved to this area, known as the New Acquisition in the 18th century, there were no doctors. Because of her expertise, she treated and cared for her family and her neighbors.
The Bratton family brought little in the way of earthy goods with them, but they brought a strong allegiance to God and family, as well as a fierce love of liberty. Their Scots-Irish heritage was a clannish one, and their loyalty to each other was real.

Most of the factual information we know about Martha is during the summer of 1780. Charlestown fell to the British in May, and British and Tory soldiers were ordered to quell any rebellion.

Martha’s husband William and his militia were away for much of that summer at General Thomas Sumter’s camp, so Martha was in charge of their children, their home, and their land. Elizabeth, young William, young Martha, Jane, and Elsie were their children.

Two specific stories are told about how Martha stood up to the enemies of her new country. Both were in the summer of 1780.

A British soldier, Captain Christian Huck, was constantly attacking homes, meeting houses, and people in the New Acquisition. He had a hatred for the Scotch-Irish and made it clear with his words and the violence of his attacks.

In June, Huck had burned Reverend John Simpson’s home and killed a young neighbor. William Hill’s Iron Works was the headquarters of the Whig militia, and Huck burned it and the Hill home. His house-to-house raids struck fear in the whole community.

Soon it was July and time to get the wheat crop in. The crop was necessary to their livelihood, and there were only three days to get the wheat in before it would go bad. Besides using the wheat for baking, the stalks were fed to the livestock.
Martha and her four oldest children, as well as some of the older men including her brother-in-law Robert, were hard at work in the Bratton fields on July 11. It was a back-breaking job. The adults, as well as Elsie and Jane, all leaned over and cut the stalks as close to the ground as they could. Young Martha and William bundled them together. They all worked hard, but kept a watchful eye out for any British troops.

Word had come to the family that Huck was on the move that day. Martha knew that William and the rest of the men of the New Acquisition militia needed to know about these new atrocities. William’s militia was with Brigadier General Thomas Sumter at a camp. She sent Watt, one of their slaves, on a mission to alert the men that their homes and families were in danger.

Captain Christian Huck, a thirty-two year old lawyer, had been given new orders that read he was to “push back the rebels as far as you deem convenient.” His goal was to do just that.

When Captain Huck, his British soldiers, and Tory militia of over a hundred men galloped up the road to her home, everyone in the field hurried to the comparative safety of the house.

Martha hung the sickle on the outside wall, and stood with her loaded musket awaiting the intruders. Her children were with her, along with her brother-in-law. The wait was not long; within minutes enemy soldiers were standing beside her.
“Where is your husband?” was the quick question.

Martha’s reply was just as speedy, “I do not know the exact whereabouts of my husband.”

As she finished speaking, an unknown Tory soldier grabbed the sickle and Martha. He put the sharp sickle to her throat and asked again about William. Once more, Martha refused to give any information. The angry man tightened his grip, but Lieutenant John Adamson, another Tory, knocked the sickle away with his sword. Within seconds, the lieutenant used his sword to make sure the unruly soldier was off the porch and on the ground.

That afternoon Captain Huck tried his hand at finding out where William Bratton was, but he was not successful either. Martha didn’t know where the camp was, but she made it clear she wouldn’t divulge it even if she knew. Huck was nice to young William for a few minutes and allowed him to sit on his knee and play with his watch, but Huck’s anger at Martha’s uncooperativeness landed William on the floor with a bloody nose.

As a mother, Martha must have been angered by the man’s carelessness that caused injury to her son. But she knew she was not in a situation to aggravate him further. She had to protect her children, not put them in more jeopardy.
Huck demanded Martha cook a meal for him and his officers. I wonder how hard that was for her. If you have visited Brattonsville, you know how small the keeping room is. She cooked and served the enemies of her family and country at the same table where her family usually sat. It is said she considered poisoning the meal, but again that might have brought on more danger. Martha chose to protect her children by not taking this chance.

Finally Huck left. A guard was posted around the Bratton house. Doubtless, it was a long night.

Colonel Bratton did receive the news that Huck was wrecking havoc in his neighborhood and his family was in danger.
133 men under the leadership of William Bratton, John McClure, Andrew Neil, and Edward Lacy set out to protect their families and their land. There was a half moon that night of July 12, 1780, but the militia didn’t need it. They were in familiar territory, and anger drove them against the enemy.

Surprise was on the Whig side. The British forces were camped around the home of John Williamson. Huck had 35 British Legion Dragoons, 20 New York Volunteers, and 60 Loyalist militia. The four posted guards were shot quickly, and then the Whig militia marched in.

Huck ran outside and was clearly seen in his white shirt. He mounted his horse and raised his sword to rally the troops. Seeing he was surrounded, he and several of his dragoons tried to escape. Huck was killed by a single rifle shot by John Carroll.

Within five minutes, the battle was over.

Adamson feared for his life and asked someone to get Martha. He knew she would tell about how he saved her life. When she recognized John Adamson, she did not hesitate on telling her husband and the other soldiers about his actions on her front porch. She insisted that the wounded be taken to her home.

Besides nursing Captain Adamson back to health, Martha also nursed the wounded from both sides. She turned her home into a hospital. Martha demonstrated mercy to her enemies and the enemies of her country.

The winning of this battle encouraged the Whigs and gave hope to the Brattons and their neighbors that the enemy could be defeated. More volunteers joined the Whig cause, and these part time soldiers continued to taste victory. The defeat of the dreaded British Legion gave new heart to the Upcountry.

Besides her part in the Whig victory of the Battle of Huck’s Defeat, it is told that Martha stood up to another group of Tories the next month in August.

Before Charlestown fell to the British, Governor John Rutledge had sent around kegs of gunpowder to different citizens to hide until it was needed. The Brattons had a keg hidden on their farm.

Tory soldiers came to find the gunpowder to use for themselves, but Martha was warned ahead of time about their mission. She raced to the tree where it was hidden and blew it up just as the enemy arrived.

Of course, she was caught. There was nowhere to hide. Struggle against the arms that held her was as futile as escape. Angry voices asked her who had blown up the powder. The soldiers looked for a man, and they demanded the whereabouts of the traitor from Martha.

Martha boldly told them she was responsible with the words, “It was I who did it!” Though outnumbered once again by the enemy, she bravely announced her actions.

Martha was willing to pay the ultimate price for independence and freedom, but this was not required of her. Though she was threatened, Martha was fearless and never wavered in being a firm supporter of freedom. It is said that she encouraged her family and neighbors to stand tall.

William and Martha Bratton’s children obviously were proud of their parents.

On July 12, 1839, there was a celebration of Huck’s Defeat at Brattonsville. Dr. John Bratton, William and Martha’s youngest son, believed that the Whig victory should be celebrated. Many words of remembrance were spoken and toasts of spring water were offered to the Whig soldiers that were involved in this battle. I believe the toast made to Mrs. Martha Bratton on that day is worth noting.

“To the memory of Mrs. Martha Bratton – In the hands of an infuriated monster, with the instrument of death around her neck, she nobly refused to betray her husband; in the hour of victory, she remembered mercy, and as a guardian angel interposed in the behalf of her inhuman enemies. Throughout the American Revolution, she encouraged the Whigs to fight on to the last; to hope on to the end. Honor and gratitude to the woman and heroine, who proved herself so faithful a wife, so firm a friend to liberty.”

The Bratton children also had inscribed on William and Martha’s stone, “This Marble is erected by the children of the deceased in mournful testimony of their affection and respect for their dear parents Col. William Bratton and Martha Bratton.”

Along with her children, I believe we owe Martha Bratton “respect” as we remember her valiant fight to give us the freedom and liberty we enjoy today. I salute her fearless courage and encourage you to do the same.

As Abigail Adams wrote in a letter to her husband, John Adams, “Remember the women.”