RSS Feed
← An Old Wagoner
The Tune of Hope →

In a time long ago, visitors flocked to the “luxurious” Chick Springs Hotel. Beginning in 1840 for almost 100 hundred years, this lively resort remained busy.

The Cherokee knew of this mineral springs’ healing powers. They called it “Lick Spring,” as Governor John Drayton wrote about in 1802. And it was Cherokee guides that led Dr. Burwell Chick there hunting for deer. Deer licked the local rocks, and these hunters were aware of it. As a sidebar, they mentioned to him that its water cured sores, since they had used it for years and seen its worth.

This physician planter saw the medicinal and resort possibilities of the property and bought 192 acres from owner Asa Crowder in 1839. Then he opened the Lick Springs Spa in 1840. Moving forward because of its popularity, by 1842, a completed “large and commodious” 60-room hotel was built. The price for one night was $1; he charged half-price for children, servants, and horses. In response to the popularity, he sold a few individual plots for cottages above the springs.

Before long, people traveled here for not only medicinal reasons, but also for a respite. In the 1840’s the planter class would have been elegantly dressed in public. Dresses would have been off the shoulders and tight to that 16″ waist. The hair would have been straight around the forward with ringlets around the sides. Hats and gloves were a necessity. The bonnets were full, and there was a long pointed bodice. Dresses were worn in a soft dome shape that was created by a large number of stiff petticoats. (Think Scarlett O’Hara.) For ten years, the two sons kept the property. During this time, it became one of the most popular resorts in South Carolina. There were frequent balls, card parties, and games of billiards and ten pins. Day trips to Greenville were offered, and hunting with the hotel’s hounds were popular.

A reporter in 1854 noted “the whole house busy” with “five or six tables of whist parties below the piazzas, two or three card tables employed in the drawing room, two pianos accompanied by sweet voices, one billiard table, at which the balls were constantly cracking, a nine-pin alley, and a great many outsiders and lookers on busily engaged in smoking their cigars. Some were walking to the spring, and at the spring house some were pitching quoits for exercise after drinking the sulphur and iron water.” The reporter further noted the dissection of a fresh watermelon and evening dances that often lasted until midnight.

It was a place for families, for those seeking matrimonial proposals, and those that wanted a rest from larger cities.

The resort attracted hundreds of visitors at a time and boosted the local economy, farmers “for ten and twenty miles around” finding a market for their livestock and produce.

Stage coach and train brought the guests to the springs. The stage coach picked up the visitors at  a depot on Augusta Street for the Greenville and Columbia Railroad. One of the regular summer guests was Father J. J. O’Connell from Charleston. He said masses at the hotel in the 1850’s, which were the first Roman Catholic services in Greenville County.

There was one Sunday when he conducted morning services, and that afternoon “a Baptist at the Furman University” condemned the dances that were held in the ballroom.

Both guests and those who lived in Greenville drank the water described as having a “particular flavor and villainous smell.” (This sounds like so many of the medicines I was forced to drink as a child, before flavoring was added to those drinks!)

In 1857, ownership left the Chick family. Popularity of this resort/spa continued under Franklin Talbird and John T. Henry. The Civil War put an end to the faithful patronage; 1861 was its last season.

Then in November, 1862, the hotel burned at an estimated cost of $18,000. The Chick brothers tried once again and bought the property back; then in 1885, they sold it to the Atlanta attorney, George Westmoreland.

Women’s fashions had changed quite a bit by the 1870’s. As the hoops flattened in front, they soon became gathered at the back of the dress and the bustle was born, with fullness below the hips. The style was characterized by a slim look, high necks, draped overskirts, frilly trains and endless embellishments. And for the first time, hairstyles radically changed when a fringe of short, tightly curled (or frizzy) bangs began to appear.

In 1903, J. A. Bull bought the hotel and started the Chick Springs Company, selling the mineral water in bottles. Mr. Bull believed in the power of advertising. The Greenville Daily News, in 1903, printed an ad for the mineral water: “Get the Habit. When you get up feeling badly, don’t drink a glass, drink a half gallon bottle of Chick Springs water before breakfast. You’ll have an appetite. You’ll feel better all day.” (Two quarts of what was described as smelly and not fragrant would probably have been difficult to swallow!) 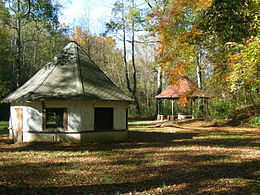 Besides marketing the mineral water, he enlarged the hotel from 16 to 119 rooms. He also added to the entertainment with a larger dining room and ballroom, tennis courts, horseback riding, golf links, bowling, archery, and a swimming pool. Amenities for his guests included a long-distance telephone line and deliveries of newspapers from New York and Washington. And one of the most modern conveniences was a ride from the train depot in one of Greenville’s first cars. These extras added up to his customers.

In 1908, women threw off much of the frill and lace from their clothes and embraced the “New Woman” look with tailored suits and tailored blouses and skirts. Cycling was still a popular pastime for women during the early 1900s. Blouses and skirts, still layered over tightly corseted figures, were worn for leisurely bike trips. Fire struck the hotel again in 1907. Even though Bull tried to salvage his business by expanding an annex that was saved, he gave up in 1903. Once again, the land changed hands. J. Thomas Arnold built a 100-room hotel in 1914, and it opened in May for the season. Unfortunately, America entered WW I, and the guests departed for good.

The building hosted the Chick Springs Military Academy beginning in 1916. Two years later, Dr. B. B. Steedly opened it as a “happy combination of hotel and sanitarium.” Unexpectedly, the doctor died, and the clinic closed in 1932.

Businessmen continued to try to make the area return to its heyday. The Bulls built a swimming pool that was fed by Lick Creek in 1926. In 1927, the Chick Springs Ginger Ale Company was incorporated to manufacture carbonated beverages. The Company also constructed a swimming pool and opened a park that included picnic facilities and a large dance floor. The business failed during the Depression, and the resorting at Chick Springs ended.

Robert Mills reflected in his book, Statistics of South Carolina that the “beautiful spring bursts and boils up from the earth in a large stream” and that the waters were “of so salubrious a nature that many persons visit them in the autumn for health.”

All of these springs during the nineteenth century lured those with leisure and money to these natural wonders. Hotels rolled out the red carpets to cater to days spent in luxury and whiling away time reading on the porches or under gazebos, playing cards, dancing, or other entertainments.

As Ralph Waldo Emerson said, “Guard well your spare moments. They are like uncut diamonds. Discard them and their value will never be known. Improve them and they will become the brightest gems in a useful life.”
I believe more leisure in the 21st. century would be a healthy addition for all of us. What do you think?

Posted in Uncategorized. Bookmark the permalink.
← An Old Wagoner
The Tune of Hope →