Christmas at the Cotton Mills 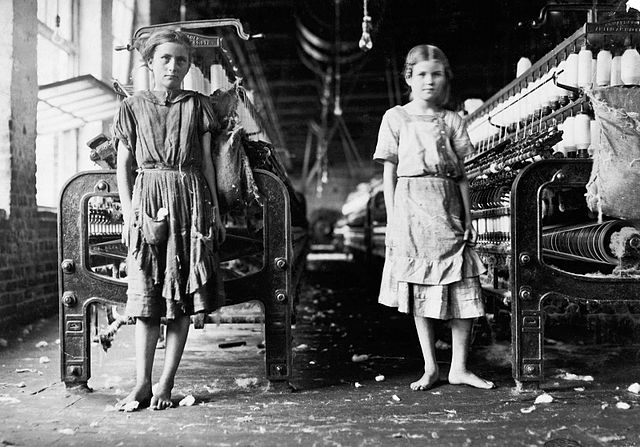 There was always a Christmas program at the mill school. Children memorized parts of the Christmas story from Luke, stood in a row, and recited it, verse by verse. The children learned carols, and some sang solos. The school presented its program during the week of Christmas during school  hours. If parents weren’t working the first shift, they attended, sat in uncomfortable straight back chairs, and beamed at their children’s performance. Mothers were the mainstay of those in the audience.

The company filled the bags with just the right amount and variety of fruit, candy, nuts, peanuts, and jelly. Because fruit was scarce and sweets were dear, these bags were appreciated.  Folks who were unable to come to the mill received home delivery. Some mills gave each family a turkey for Thanksgiving and a ham at Christmas.

Most mills presented to each employee of one year service or longer, a check in the amount of one week’s salary. Those who had been in the employ of the Mills for less than one year received checks in proportion to their time of employment. The workers, who were children, would receive monetary gifts of $1-$3.

Fireworks were part of the celebrations in the village. Early in November, catalogs from distant companies arrived in the company store. Orders would be shipped by railroad express. Packages of All American Boy, Noisy Boy, and others would arrive for only a few dollars.

Parents worked hard to put food on the table during the Great Depression. Sometimes the dad would trade for silver bombs for their sons. It made a powerful popping sound, and soon the air was full of those pops. Late-sleepers had a sudden awakening when a silver bomb was thrown on their porch.

Most families had a tree. Christmas trees were decorated with lead icicles and small  snow  flakes that the mothers crocheted. Strings of popcorn and berries were woven around the limbs.The cut trees were either a small pine or holly found in the woods and nailed to a wooden base.

Mill families lived a hard life. It took the adults and children working to make ends meet. Christmas didn’t erase this life style, but for a day they were forgotten.

Bill Shephard writes about what he bought for his family in 1935 with money he earned by selling trees he cut down and splitting some wood for a neighbor.

My Christmas earnings now totaled ninety cents! If I didn’t earn another penny, I could purchase a gift for every family member and have some left for myself, and that is exactly what I did!

A small tea-set for my sister cost a dime. A pretty box of ladies handkerchiefs for Mom cost another dime. A necktie for Dad, which he never wore, and a pair of socks for each of my brothers, cost ten cents each. I still had forty cents left for myself! I purchased a box of ten rolls of caps for the cap-pistol I knew I would get from Santa, and six boxes of firecrackers, along with two boxes of sparklers. I still had a nickel left with which to buy a large bag of p-nut brittle for me.

Mr. Shephard learned early how to stretch a dollar.