My Granddaddy, An Air Raid Warden During World War II

I continue to be surprised by my family’s history. Looking through another family envelope the other day. I found a certified picture ID for my  granddaddy, John Alexander Cox, known as Alec,who was an air raid warden in Charleston, SC, during World War II. He never talked about it.

He was too old to serve as a soldier, but I never knew he held this civilian job.

As war spread across the globe, cities and states were responsible for coordinating preparations for war-related emergencies.

The civilian defense program against air attacks began with pilots who flew along the coastlines and plane spotters who manned towers to watch for approaching enemy planes. There were also blackout drills that forced people to practice their response to the air-raid alarm signal—a series of intermittent siren blasts.

Air-raid wardens supervised the blackout drills, cruising up and down neighborhood streets to make sure no light escaped the houses. By early 1943, there were about 6 million volunteers in public protection roles such as air-raid warden. 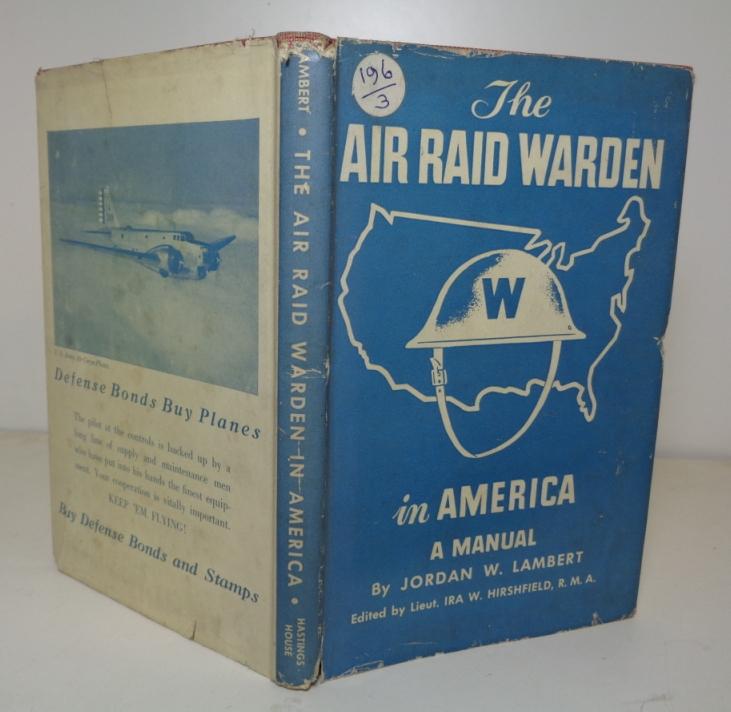 Blackout drills were planned in advance and advertised. Street lights were turned off at the scheduled time. Anyone outside was to take cover inside. Those in their homes were instructed to pull down the blinds on their windows and keep the light inside to a minimum. People in cars were to pull over and find shelter in the nearest building. The idea was that enemy planes couldn’t target what they couldn’t see, and that any light visible from above could attract bombs and gunfire.

Charleston, being a prime military target, citizens lived in expectation of being bombed at any moment by enemy planes and that their attack would come under the cover of darkness. Sirens sounded all over the city to signal the start of the drill. Air raid wardens and their assistants walked up and down the streets of their assigned blocks and looked for signs of light emanating from houses. If they saw any, they blew their whistles, shouted, banged on the house, rang its doorbell, whatever it took, to alert the residents of the light.

Teenagers often served as messengers and wore a Civil Defense armband with a lightning bolt superimposed on a triangle within a circle on it.

One young messenger told this story.

As an air raid messenger, I had to carry messages through the dark streets from one air raid warden to another. During one drill, a warden handed me a message and told me to deliver it to a warden two blocks away—PRONTO! I took off into pitch-black darkness on my bike as if the lightning bolt on my armband had come alive. I had gone half a block when I suddenly became airborne upon running into the back of a parked black coupe automobile. I skidded across its roof and down onto its hood, rolled down onto the ground, got up, shook off my daze, ran to the back of the auto, picked up my bike, pushed its front wheel back in line, took off again, and delivered the message.

Prime Minister Winston Churchill was accurate when he described our country. “I thought of a remark . . . that the United States is like a ‘gigantic boiler. Once the fire is lighted under it there is no limit to the power it can generate.’ Being saturated and satiated with emotion and sensation, I went to bed and slept the sleep of the saved and thankful.”

Posters about the importance of secrecy were everywhere, and everyone took them seriously. It wasn’t too far-fetched to suspect that the guy standing next to you on a street corner or sitting at the next table in a restaurant or bar might be an enemy spy. 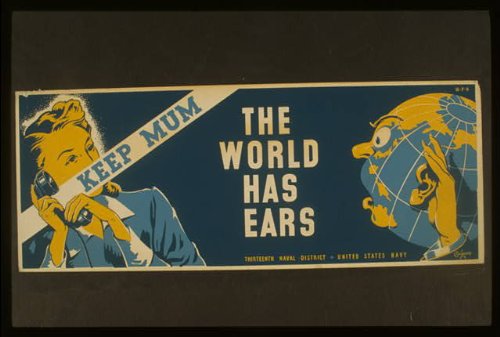 Security was a matter of great concern, especially in a city as heavily military as Charleston. In addition to posters on the subject everywhere, large signs with strong warnings that no photos were to be taken were posted all along the waterfront. Security was so intense that radio stations could play only songs approved by the Federal Government for fear that the broadcasting of certain selections could be used to transmit information to the enemy. The few approved songs included the works of Stephen Foster. “Old Folks at Home” and “Beautiful Dreamer.”

There were drives every week to collect scrap paper and metal to help in the war effort. Trucks picked up bundles of newspapers and boxes of tin cans from in front of doorways where they had been put for us.

A small red bordered flag with a blue star in its middle hung in the window of each home having someone in the military. 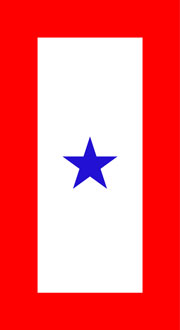 Posters were everywhere. One flyer pictured the emergency supplies every household was supposed to keep: 50 feet of garden hose with a spray nozzle, 100 pounds of sand divvied into four containers, three three-gallon metal buckets (one filled with sand and two with water), a long-handled shovel with a square edge, a hoe or rake, an ax or hatchet, a ladder, leather gloves, and dark glasses.

Air raid protection was one of the top concerns for civil defense organizations. To assist them, the OCD published a booklet called “What to Do in an Air Raid.” OCD printed some fifty-seven million copies. Newspapers published the information as well. The booklet advised Americans to identify a central refuge room in their homes and to have stout tables on hand that they could crawl under if air raids occurred.

“An air raid warden is not a Doctor, or a Policeman, or a Fireman, but he may be called on to perform the duties of any of these,” a training paper says. “He has a position of leadership and trust that demands his best.”

So grateful for Granddaddy’s service, as well as so many unknown others who stepped up to fight for our country during World War II. Those on the home front were heroes, too. Thank you for your service! 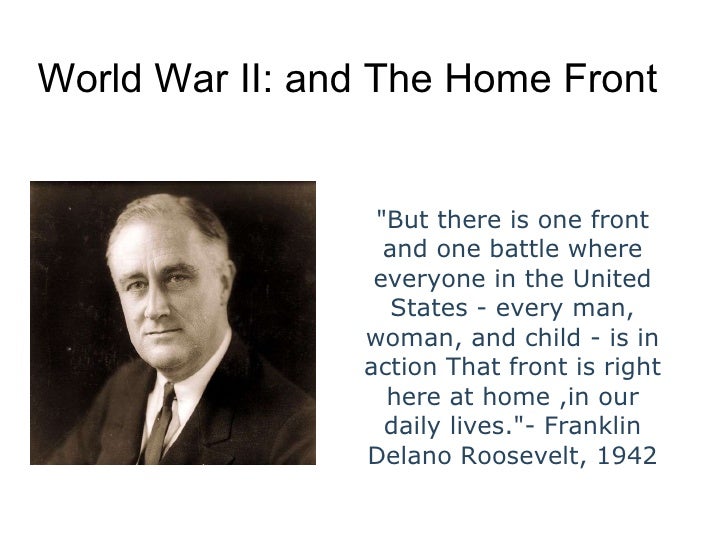