February is the time of year when we consume even more than usual, often from heart-shaped boxes gifted by an admirer.

Daddy gave Mother a box for her birthday in November and for Valentine’s Day.  She didn’t share these boxes, but hid them. Whenever her craving prompted her, she would have her choice from those in the Whitman Sampler box.

Probably one of the most universally loved foods, the average American consumes roughly 11 pounds of the stuff a year!  It is hard to imagine a world without chocolate and this love of the heavenly substance stretches all the way back to our country’s colonial roots. Before the mid-1800s, if you had a craving for the world’s favorite sweet, you drank it! 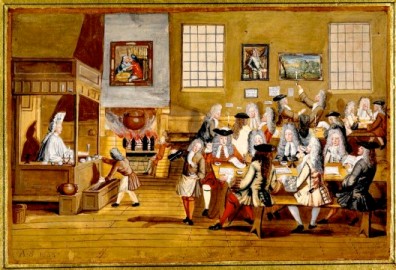 Chocolate has its origins in South America where archaeological evidence indicates it was being cultivated and consumed over 3,000 years ago.  The Spanish were the first Europeans to try the spicy chili and chocolate beverage of the Aztecs.  They introduced it to Europe in the 1600s where, with the addition of sugar, it became the height of fashion.

The first printed evidence we have of Chocolate being used in London is in the notice in the Public Advertiser in 1657: “In Bishopsgate St is an excellent West India drink called chocolate to be sold, where you may have it ready at any time, and also unmade at reasonable rates.”

By the end of the Commonwealth in 1659, Thomas Rugge, a London diarist, was writing in his Journal about coffee, chocolate and tea as new drinks in London, and referring to chocolate as ‘a harty drink in every street’.

Drinking chocolate of the 18th century was different from our ubiquitous modern day cup of cocoa.  It was made with either cacao nibs or blocks of compressed chocolate that were then grated or ground to a paste and dissolved in a warm liquid inside a dedicated ‘chocolate pot’.

The chocolate would have been delivered in chocolate bars.

It may seem strange to us that there were special cups just for drinking chocolate.  However, since it was a luxury good enjoyed by the upper classes, it had a specific set of objects associated with its preparation and consumption.  A teapot or teacup could have easily functioned for drinking chocolate but the purpose of this specialized material culture was to show off wealth and sophistication.  For this reason, a well-to-do colonial household would have separate sets of vessels for the making and consumption of tea, coffee, and chocolate.  Using the right one in the right way let your peers know you were a well-educated gentry woman or man.

The most recognizable feature of a chocolate pot however is a hole in the lid where the chocolate mill, or molinillo, would be inserted and rubbed between the hands to briskly stir the chocolate, creating a delicious froth on the top

Kind of makes you want to try eighteenth century chocolate drink, doesn’t it?  The next time you’re enjoying a bite of a candy bar or sipping your instant cocoa, think of the lofty origins of that treat and be grateful to the sweet-toothed colonials who so prized delicious chocolate!

I grew up with hot chocolate being a treat on cold nights, and marshmellows were added for a topping. Even now, I will make us a cup during the winter months as a treat. Whether with that white addition or not, hot chocolate seems to be a comfort food to be enjoyed.

“Some days you get up and you already know that things aren’t going to go well. They’re the type of days when you should just give in, put your pajamas back on, make some hot chocolate and read comic books in bed with the covers up until the world looks more encouraging. Of course, they never let you do that.”
― Bill Watterson, There’s Treasure Everywhere: A Calvin and Hobbes Collection