One Look at Bravery

One of my choices for the new year is to read and write more. In looking at our home with a modicum of reality, we might be called “book poor.” I tend to describe it as “book rich.”

Yes, there are stacks of books in every room of our home, as well as in attic boxes. Five book shelves are packed two deep with others on layered on top. Baskets of books are in all the rooms, including the kitchen with my well-loved recipe books. (I treasure those that my grandmothers used.)

I am in total agreement with Erasmus when he said, “When I have a little money, I buy books; and if I have any left, I buy food and clothes.”

Two new books were part of my Christmas, and I am halfway through Louise Penny’s new book,  Kingdom of the Blind. And, as usual, this Canadian author had me hooked in only a few pages.

I believe I have to agree with Jane Austen in Pride and Prejudice, “I shall be miserable if I have not an excellent library.”

Many eighteenth century women lived on the fringes of written records. Their exploits of tending hearth and home were not the tales of warriors on the battlefield or politicians changing America. Few letters or diaries recount their daily lives of survival, and portraits are even more rare.

My first four books were about Revolutionary War heroines in South Carolina. I immersed myself in that period of history. The role of women, as not only homemakers but vigilant defenders of their turfs themselves, continues to amaze me.

Elizabeth Hutchinson Jackson left her home and parents for the colonies, survived early widowhood, and successfully raised three sons. Life-altering events raised havoc in her life, but she refused to be defeated.

With her two youngest sons, Robert and Andrew, confined in the filthy Camden jail by the British, Elizabeth demanded a prisoner exchange.

Read how this might have worked out in the spring of 1780….

“My Lord, I beseech your pardon for my two sons, Robert and Andy Jackson. Word has it that a prisoner exchange is being discussed, and I beg you to add their names to the list. The youngest has only turned fourteen, and Robert is sixteen. I will take responsibility for their future actions,” spoke the seemingly composed, though bedraggled, mother.

Her lilting Irish accent caught Lord Rawdon unawares. Yes, the men in his regiment from Ireland still spoke with their Irish brogue, but the soft and feminine inflections of Elizabeth’s speech obliged him to think of home and his family.

Rawdon did not immediately reply. Looking through the stack of papers on his desk, Rawdon found the list he sought. It was this morning’s registry of those prisoners afflicted with smallpox. Quickly scanning the record, he saw both Robert and Andy Jackson’s names.

A glint in his eye appeared, as he thought how to satisfy the Patriot mother and also protect his men. Allowing the exchange of these sick boys would take the dreaded disease to their home and community and also rid his prison of two with the revolting disease.

“It appears that both your sons have contracted smallpox. I believe it will be best for them to be part of our trade for prisoners. You may pick them up tomorrow.”

I can imagine her quaking heart as she walked in where angels feared to tread, but I admire her bravery and resolve to achieve her sons’ freedom that day and the way she faced all her trials and ordeals. After you have read her story, I believe you will agree. 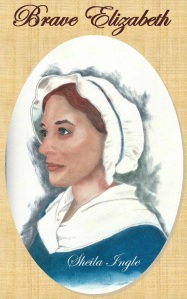 “You can never get a cup of tea large enough or a book long enough to suit me.” – C.S. Lewis