Come one! Come all! It’s Festifall at Walnut Grove!

Watch history come alive at this Upcountry Plantation this weekend. 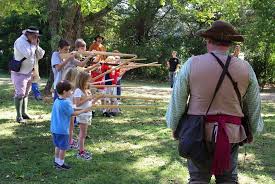 Enjoy talking to the reenactors who can both tell and show you about how Charles and Mary Moore lived. There was no electricity or indoor plumbing. They had to hunt, fish, or grow their own food. Dishes and utensils were crafted of wood or pewter. Clothes and tools were made. Nothing was easy.
Charles and Mary Moore established the plantation c. 1767.  They raised ten children in the house they built and lived in for 40 years. During the Revolutionary War, the Moores, including daughter Margaret Barry/Kate, supported the Patriot cause. Local militia mustered at Walnut Grove prior to the Battle of Cowpens.
Loyalist William “Bloody Bill” Cunningham raided the plantation in November, 1781 and killed a Patriot soldier sheltered by the Moores. There will be a reenactment of this battle.
Robert Frost wrote, “Freedom lies in being bold.” Our immigrant ancestors that fought for their lands were dedicated to staying in America. Loyalists/ Tories were not going to steal it from them.
Dr. Andrew Barry Moore/Dr. Jeff Willis will open his office once again both afternoons for visitors to Festifall. Learn how medicine was practiced during the 18th century. (Leeches were only a part of this story!)

The untrained farmers/militia that fought for our freedom during the Revolutionary War were heroes and heroines that we must not forget. Visiting a celebration like Festifall helps us all to remember the price they paid, lest we forget.
“Freedom is never more than one generation away from extinction. We didn’t pass it to our children in the bloodstream. It must be fought for, protected, and handed on for them to do the same.”–President Ronald Reagan
It’s going to be a fun weekend. I hope to see you there!

“The benefits of education and of useful knowledge, generally diffused through a community, are essential to the preservation of a free government.” Sam Houston

This Revolutionary War Festival has been introducing visitors to life during these early times for 23 years. Reenactors make butter, baskets, and corn husk dolls. They craft wooden buckets and brooms, farm implements from molten iron, pottery vases, and cooking implements. It is fascinating to watch these creations from their beginnings to the finished products.

Men, women, and children camp out in tents for two nights, and they wear the clothes of the late 18th century. The militia recreate the battle for the house against a group of Tories led by Bloody Bill Cunningham.

This gentleman was sharing the skills of surveying during the 18th Century. President George Washington was a surveyor.

These past two days I enjoyed meeting new friends, talking about the women during the Revolutionary War, and signing books. Two visitors shared stories with me that touched this author’s heart.

A former third grade teacher and her grandson stopped by my table, and she said she read “Courageous Kate” in her classroom every year until retirement. Then she passed the book on to her daughter for her to read to her third graders. Another family stopped by, who I have met at different historical events through the years; they home school their children. One of their daughters told me she had read “Courageous Kate” times! I bet she has it memorized by now.

Thank you, readers, for continuing to support my writing. It is so much fun to talk to you about our nation’s history and how we must continue to share the stories with the next generation, as well as each other.