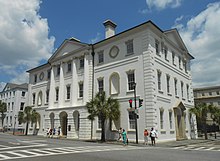 Established December 28th, 1748 by nineteen young gentlemen of various trades and professions wishing to avail themselves of the latest publications from Great Britain, these men wished not only to keep abreast of the intellectual issues of the day but also to “save their descendants from sinking into savagery.” Ten pounds sterling bought their first order.

First, they ordered pamphlets and magazines from London that had been printed the year before. Then they started ordering books; copies of classical books were a priority. The society was “in a large measure, a social club,” and by 1750 had about 160 members. Leaders in Charleston’s society coveted membership.

As Ralph Waldo Emerson said, “If we encounter a man of rare intellect, we should ask him what books he reads.”

This organization paved the way for the founding of the College of Charleston in 1770; a goal of the membership was to promote education. By purchasing scientific instruments and providing regional exhibits, they promoted the study of the regional natural history.

This also was the origins for the founding of the Charleston Museum (the first in America) in 1773. The collection was quite mobile. At first, elected librarians safeguarded the Library’s materials in their homes. In 1755, William Henderson was elected librarian of the Society, and collecting he moved the collections into the Free School (of which he was headmaster) on Broad Street. From 1765 until 1778, it resided in the upstairs of Gabriel Manigault’s liquor warehouse. In 1792, the collection was transferred to the upper floor of the Statehouse, currently the County Courthouse at Broad and Meeting.

Henry Wadsworth Longfellow collection in the Archives.
From 1835 until its 1914 move to the current King Street location, the Charleston Library Society occupied the Bank of South Carolina building at the corner of Church and Broad Streets. For their building fund, they sold “brick” memberships to the public.

This video takes us up the steps and inside the Library.

Aren’t we grateful that those 19 young men who believed in the importance of reading?

Louis L’Amour put it this way, “For one who reads, there is no limit to the number of lives that may be lived, for fiction, biography, and history offer an inexhaustible number of lives in many parts of the world, in all periods of time.”