My Birthplace – Charleston, South Carolina in the 1700’s

Many today call Charleston the Holy City because of all the churches that grace this seaport town. It is a major tourist attraction, and I take every opportunity to visit it. In fact, I introduced John to this city on our honeymoon. Thankfully, he learned quickly the serenity in my spirit that sitting or walking along the Battery, Folly Beach, Meeting Street, the Market, etc. bring to me.

As I have written about women who lived in colonial times in South Carolina, then it makes sense for me to also conclude with descriptions about this fair city. They are not as favorable as I might wish, but in fairness, it was a different time.

“Black and white all mix’d together,
Inconstant, strange, unhealthful weather
Burning heat and chilling cold
Dangerous both to young and old
Boisterous winds and heavy rains
Fevers and rheumatic pains
Agues plenty without doubt
Sores, boils, the prickling heat and gout
Musquitos on the skin make blotches
Centipedes and large cock-roaches
Frightful creatures in the waters
Porpoises, sharks and alligators
Houses built on barren land
No lamps or lights, but streets of sand
Pleasant walks, if you can find ’em
Scandalous tongues, if any mind ’em
The markets dear and little money
Large potatoes, sweet as honey
Water bad, past all drinking
Men and women without thinking
Every thing at a high price
But rum, hominy and rice
Many a widow not unwilling
Many a beau not worth a shilling
Many a bargain, if you strike it,
This is Charles-town, how do you like it.”

Written by a Captain Martin, captain of a British warship

It is certainly true that several other pre-Revolution chroniclers wrote of Charleston’s trendy and affluent high society and of her pesky crawling creatures.

Writing to her brother Thomas in England in 1742, Eliza Lucas Pinckney wrote, “There is a polite gentile behaviour…4 months in the year is extremely disagreeable, excessive hot, much thunder and lightning, and muskatoes and sand flies in abundance. Charles Town, the Me”The people in general hospitable and honest, and the better sort add to these tropolis, is a neat pretty place. The inhabitants polite and live in a very gentile manner; the streets and houses regularly built; the ladies and gentlemen gay in their dress.” Rev. Johann Martin Bolzius (1703-1765), leader of the German Lutheran settlement of Ebenezer, Georgia, wrote of Charleston in 1750, “It is expensive and costly to live in Charlestown…The splendor, lust, and opulence there has grown almost to the limit…Its European clothes it would have to change according to the often changing Charlestown fashion. Otherwise there would be much humiliation and mockery.” Philadelphia merchant, Pelatiah Webster (1725-1795), wrote of his business trip to the city in 1765, “The laborious business is here chiefly done by black slaves of which there are great multitudes…Dined with Mr. Liston, passed the afternoon agreeably at his summer house till 5 o’clock P. M. then went up into the steeple of St. Michael’s, the highest in town & which commands a fine prospect of the town, harbour, river, forts, sea, &c…The heats are much too severe, the water bad, the soil sandy, the timber too much evergreen; but with all these disadvantages, ’tis a flourishing place, capable of vast improvement.” (nationalhumanitiescenter.org/pds/becomingamer/growth/text2/charlestowndescriptions.pdf) Peter Manigault and his friends by George Roupell

So, yes, I do love this fair city. The sea breezes and the history lure me back on a regular basis. Periodically, I even go back to the home on Wentworth Street where I lived as an infant and toddler. Until I was a teenager, my grandparents still lived there. Both memories and pictures of my family in different rooms fill my mind and heart each time I think about this house. 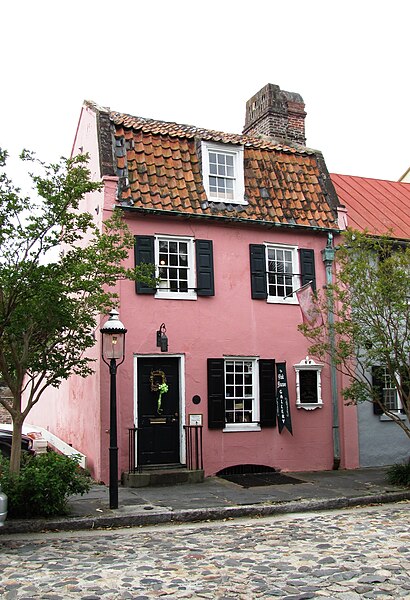 The house was built between 1694 and 1712 of pinkish Bermuda stone by John Breton in the city’s French Quarter. Because of historical restrictions, the bathroom is still in the backyard. One famous matron from the 17th-century was Madame Mincey, who was a French Huguenot and longtime owner. It is the second oldest residence built in Charleston.

As Charleston grew, so did the community’s cultural and social opportunities, especially for the elite merchants and planters. The first theater building in America was built in Charleston in 1736, but was later replaced by the 19th-century Planter’s Hotel where wealthy planters stayed during Charleston’s horse-racing season (now the Dock Street Theater). Benevolent societies were formed by several different ethnic groups: the South Carolina Society, founded by French Huguenots in 1737; the German Friendly Society, founded in 1766; and the Hibernian Society, founded by Irish immigrants in 1801. The Charleston Library Society was established in 1748 by some wealthy Charlestonians who wished to keep up with the scientific and philosophical issues of the day. This group also helped establish the College of Charleston in 1770, the oldest college in South Carolina and the 13th college in the United States.

As Pat Conroy said, “There is no city on Earth quite like Charleston. From the time I first came there in 1961, it’s held me in its enchanter’s power, the wordless articulation of its singularity, its withheld and magical beauty. Wandering through its streets can be dreamlike and otherworldly, its alleyways and shortcuts both fragrant and mysterious, yet as haunted as time turned in on itself.”