In the Colonial period, tropical storms and hurricanes were known as “September gales,” probably because the ones people remembered and wrote about were those which damaged or destroyed crops just before they were to be harvested.

Charleston was hit on September 25, 1686. It was described as “wonderfully horrid and destructive…Corne is all beaten down and lyes rotting on the ground… Aboundance of our hoggs and Cattle were killed in the Tempest by the falls of Trees…”

But this gale also protected Charleston by preventing a Spanish naval assault on the city.  It destroyed one of their galleys and killed the commander of the Spanish attack.

On August 28, 1893, an unnamed storm left its calling card of destruction. This storm made landfall near the South Carolina / Georgia border, winds estimated at over 120 miles per hour, loss of life estimated at more than 2,000 and thousands were left with nothing.

Clara Barton, the American Red Cross founder, launched a 10-month relief effort on the islands and said some 35,000 people lived on the islands were affected.

It would be called The Great Sea Island Storm, as the storm’s strength was so great that a tidal wave that struck at high tide near Hilton Head consumed entire islands. It also spun destruction from Jacksonville, Fla., into New York.

Hurricanes and tropical storms are irregular visitors to coastal South Carolina. Starting in 1851, there is more information about each one. In the period, 1851-2018,  thirty-one hurricanes have made landfall on SC. In that same time period, forty-seven, made direct hits on North Carolina.

Winds, rain, and surf overwhelmed parts of North Carolina, and Hurricane Florence shared her visit with South Carolina, too. The images on the television and the internet have been horrifying. For those who were in her path, it has been heart-rending. And now, flooding will take its toll.

Hurricane Hugo attacked South Carolina and North Carolina 27 years ago, but those that lived through its assault have not forgotten its sound and fury.

“The weather on September 21st, 1989 started off not much different than any other late summer or early Fall day. But that all began to change quickly as nighttime approached. For those that decided to stay it was certainly a night they will never forget.”

We don’t have to wait for storms to come into our lives; strong winds of hurt and loss can make us stumble during any day or month. But as Gandalf said, ““All we have to decide is what to do with the time that is given us.”

I watched a DVD series last month called the Winds of War. It was a 1983 miniseries based on books written by Herman Wouk. The plot follows an American family as they face the history before World War II. Even though the circumstances are the same, each individual has different reactions and chooses his own path, just as in life.

In her book, Bird by Bird: Some Instructions on Writing and Life, Anne Lamott tells this story.

“Thirty years ago my older brother, who was ten years old at the time, was trying to get a report written on birds that he’d had three months to write, which was due the next day. We were out at our family cabin in Bolinas, and he was at the kitchen table close to tears, surrounded by binder paper and pencils and unopened books about birds, immobilized by the hugeness of the task ahead. Then my father sat down beside him put his arm around my brother’s shoulder, and said, “Bird by bird, buddy. Just take it bird by bird.”

When we encounter someone who is buffeted by hurricanes, let’s choose to encourage them. In fact, we can walk beside them. That is what friendship is all about. 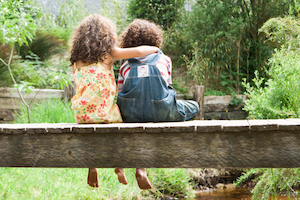 So on we go
His welfare is of my concern
No burden is he to bear
We’ll get there
For I know
He would not encumber me
He ain’t heavy, he’s my brother

It’s a long, long road
From which there is no return
While we’re on the way to there
Why not share
And the load
Doesn’t weigh me down at all
He ain’t heavy, he’s my brother

It is a privilege to walk with our brothers and sisters, isn’t it? Let’s walk together!