My dad was a lover of western television programs and movies. Critt and I grew up sitting on the floor in front of his chair watching the shows with him. All three of us intently followed the black-and-white stories brought alive by the small screen in our den. Many included riders of the Pony Express, and we were all excited to see the rider changing ponies at full gallop. Jumping from one pony to another was a scary feat of balance, and we cheered the riders on.

The Pony Express was founded by William H. Russell, William B. Waddell, and Alexander Majors. Plans for the Pony Express were spurred by the threat of the Civil War and the need for faster communication with the West. The Pony Express consisted of relays of men riding horses carrying saddlebags of mail across a 2000-mile trail. 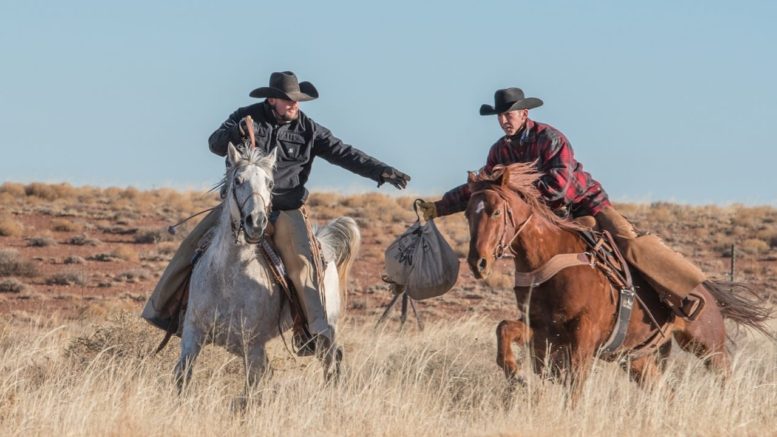 On April 3, 1860, a lone rider left the Pikes Peak Stables departed from St. Joseph, Missouri. For $5 and ounce, letters were delivered 2,000 miles to Sacramento, California within ten days.

The famed Pony Express riders each rode from 75-100 miles before handing the letters off to the next rider. These brave, young men raced against the cruel elements of nature and a rugged terrain to unite a country separated by distance.

A total of 190 way stations were located about 15 miles apart.

The service lasted less than two years, ending when the overland telegraph was completed.

Mark Twain, who encountered the riders while on an 1861 stagecoach trip to Nevada. wrote about them in “Roughing It.”

The pony rider was usually a little bit of a man, brimful of spirit and endurance. No matter what time of day or night his watch came on, and no matter whether it was winter or summer, raining, snowing, hailing or sleeting, or whether his ‘beat’ was a level straight road or a crazy trail over mountain crags and precipices, or whether it led through peaceful regions or regions that swarmed with hostile Indians, he must be always ready to leap into the saddle and be off like the wind! There was no idling time for a pony rider on duty. He rode fifty miles without stopping, by daylight, moonlight, starlight, or through the blackness of darkness — just as it happened. He rode a splendid horse that was born for a racer and fed and lodged like a gentleman: kept him at his utmost speed for 10 miles, and then, as he came crashing up to the station where stood two men holding fast a fresh, impatient steed, the transfer of rider and mailbag was made in the twinkling of an eye, and away flew the eagle pair and were out of sight before the spectator could get hardly the ghost of a look.

As the veteran rider Buffalo Bill said, “Excitement was plentiful during my two years’ service as a Pony Express rider.” (What irony!)

It was a memory of these times watching those westerns that sent me to check them out this morning and share it with you. During these stay-at-home days, I find that various memories appear more often.

My grandmother used to call this wool-gathering. I think I will continue this indulgence in idle fancies and in daydreaming.